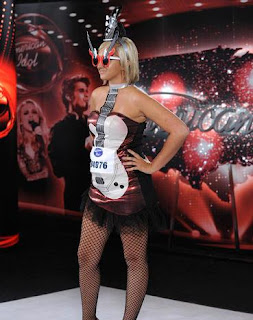 Atlanta's "Guitar Girl"
Boston and Atlanta. Chowder and Hush Puppies. Italian mama's boys and country bumpkins. These two disparate locations were the first stops on American Idol's ninth annual nationwide audition tour, where the usual dish of humiliation and ridicule seasoned with just a dash of real talent was served up to the Fox-watching public.

Every year I wish for the audition episodes to be over with quickly and 2010 is no different. It's not so much the mentally challenged hot messes that are trotted in front of the cameras for their dose of nationwide humiliation, that I despise. There's a fast-forward button for that. It's the sob stories. You know someone's heading to Hollywood if their (a) sick grandparent (b) disabled sibling (c) triumph over disease or (d) perilous financial situation gets a featurette.

In Boston, we watched 16-year old Maddy Curtis turn in a sweet, if nervous rendition of Leonard Cohen's "Halleluljah," but only after we learned about her two brothers with Down's Syndrome. Katie Stevens ripped the hell out of "At Last" but not until we heard about how she takes care of her Althzheimers-ridden grandmother. Some dude who got cancer at age 20 did a cheesy rendition of the Michael Buble arrangement of "Feeling Good" and got his ticket stamped.

Of course we also saw a parade of attractive girls with karaoke bar voices get put through in Boston, but here are the people I'll be watching:

- Tyler, the drummer who fell out of a tree and broke his hands. He has a huge soul voice and teenage girls will fawn over him.

- Amadeo, the enormous Italian dude who growled his way through a Muddy Waters tune. Pauly wasn't as convinced of his roots-rock potential.

"He could play the bar at the Mohegan Sun on Tuesday nights, but that's about it."

-Ashley Rodriguez, the so-commercial-it-hurts Rosario Dawson lookalike who demonstrated some serious technique on Alicia Keys' "If I Ain't Got You."

-Leah Laurenti, whose clear, jazzy rendition of "Blue Skies" was right up my alley.

In Atlanta, we met Keisha the buck-toothed beauty queen, a singing cop, and "Skiiboski," but the one tune we'll all be singing this morning was brought to us by a 62-year old black man who was given a courtesy audition so America could hear what is sure to be a YouTube smash-- "Pants on the Ground."

The only two I'm curious to follow from the Atlanta lot are Jermaine (who totally killed that Joan Osbourne song) and the above-pictured "Guitar Girl." I'd like to party with her in the lot of a Widespread Panic show.

UPDATE: Of course, a "Pants on the Ground" remix has already hit the internets. Check it out below. RSS readers, you'll have to click through.

UPDATE #2: Less than 24 hours after the show aired, some contestants' criminal pasts are already coming to light thanks to the ambulance-chasers at TMZ. Apparently our boy "Skiiboski" has five prior arrests in the state of Florida and five mug shots to go with them.

Check out the Skiboski mug shots here.
Posted by change100 at 10:55 AM

Hooray! The AI Blog is back! Step aside, children, and watch the hell out!

I wouldn't watch the show if you paid me. I can't sing a note and I could care less about the shattered dreams and forlorn hopes of the aspiring idols. Nonetheless, I love to read Change's dead-on take on the whole crazy scene.

It takes a true journalist to write an engaging account of what is essentially a meaningless helping of folderol. Keep up the good work.

the General is just a G version of Wesley Willis