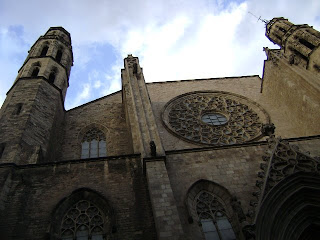 The Santa Maria del Mar church, Barcelona, Spain.
It's been a long time. Twenty-five days. Longer than it's ever been in this space.

I didn't fall off the face of the earth. I didn't disappear. I went to a music festival in San Francisco and a Radiohead show in Chula Vista. I covered the WCOOP on PokerStars and the fifth-season opener of the EPT in Barcelona. I flew up to London yesterday to cover the WSOP-Europe and moved into a sunny flat in Soho with Gloria, PokerNews' new on-air personality. I picked up groceries this morning at Sainsbury's. I am eating a baguette dressed with proscuitto and cheese and drinking a real Diet Coke, not that Coke Light shit they have on mainland Europe.

Which brings us up to this moment, but says virtually nothing of the last 25 days.

Pauly went back to New York right before Labor Day. I immediately flew into home-decorator mode the moment he left, finding myself in the aisles of the Burbank IKEA before his flight even took off. For weeks I'd been mulling over what to get him for his birthday. It's really a difficult task buying for him-- he's not so much the man that has everything, but the man that wants nothing (though the Bose noise-cancelling headphones were a definite hit last year). If you've read his blogs over the last few months you'll know that he's been in a frustrating place creatively, and that if he had one wish in the world, it would be to be able to go into a room that was his, close the door, and write.

So that's exactly what I decided to give him.

Until now, Showcase's old room housed nothing but a futon for overnight guests, a plastic set of drawers, and a portable putting green. Now it's Pauly's west coast office. 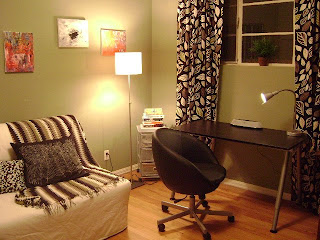 I assembled all the furniture myself, too. The desk was a breeze compared to hanging those curtains, which took three attempts and two different drill bits. I had to rush to get it done before leaving for Europe, but was thrilled with the results. I think he was too.

I test-drove the office while blogging the WCOOP over the next three nights. Though I kept vampire hours of the 8 p.m.-6 a.m. variety, it kind of helped put me on European time in advance of getting here. Also, it was one of the most drama-free assignments I've had in poker. Blogging a tournament where there are no railtards to trip over? And there are hand histories? I'll take that any day. It was also kind of fascinating to watch the entire final table of a $10,000 online event. These guys three-bet like I smoke weed.

I flew to Barcelona without incident. No screaming infants or foul-smelling seatmates. The hotel was modern and clean and close to the casino. TV only got five channels, though and one was Al-Jazeera. I knew my way around from last year and knew what to expect so I came into the gig pretty relaxed. That is, until I approached the casino on the first day. I saw Gloria, walking in a daze, her Blackberry to her ear, looking quite distressed. She had been robbed, her backpack stolen right off the back of her chair while eating in a nearby cafe. Laptop, money, passport-- gone. And even worse, the staff at the restaurant wouldn't do a thing to help her. As much as we tried negotiating with casino management, Glo couldn't even get inside without a passport per Spanish law, leaving her to take a taxi across town and begin dealing with the red tape at the U.S. Consulate. Fortunately for her, she got hooked up with a new passport right away, but it certainly left me shaken. That night, I locked my passport, all but one credit card, and all but 50 Euros in my hotel safe.

There were more than 20 robberies around the Casino Barcelona during the EPT, ultimately necessitating a press release warning the players and media. Guess the local thieves figured that was the place to be that week. While crime was flourishing outside, the conditions inside the casino had improved drastically from last year's disaster (wherein, your heroine was knocked off a chair by unruly drunken railbirds). Access was improved, there was more of a barrier between the rail and the media, and they opened the casino early for the tournament players and media so no one was getting shoved around in line by the anxious cash game players wanting to get their name in the queue as quickly as possible.

I had three days in Barcelona after the tournament, but was wary of hitting up certain areas of town, like La Rambla with all the theft going on. Turns out it was good I avoided that street, as a full-fledged riot broke out there my last night in town. I did hit up Barceloneta beach, as well as the Gracia area on the west side of the city, home to a lot of cool shops as well as the Parc Guell, designed by Gaudi. The architecture at the park's entrance is astounding and the steep climb up to it affords a truly magnificent view of the city. 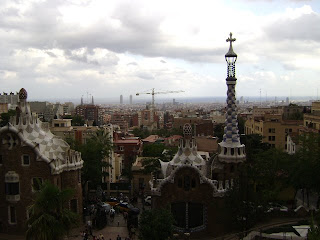 I also re-visited my favorite place we ate last year, Celler de Tapas in El Born. I got those incredible prawns again, along with squid, Mallorcan sausage, and lots of other stuff my beloved would never eat.

Mainly, though I walked and thought. Sometimes with my iPod on like the locals, most of the time just listening to others around me converse in rapid-fire Spanish and trying to understand what I could. I contemplated my future. I thought about the kind of writer I wanted to become. I read most of this book Pauly had given me before he left-- The Artist's Way. It's kind of a self-help book for artists and is pretty damn brilliant if you can get past the God stuff. And if you're into God, well then it's totally for you. One of the things the book gets you in the habit of doing is writing three pages every morning before you do anything. It's supposed to be a brain dump, to get everything out of your head so you can focus on making your art, whatever that may be, for the rest of the day. You're supposed to do it longhand, but that's not for me, so I arrived at the equivalent of 1,000-1,200 words on the computer. None of it is meant to be read by anyone but you.

The more I wrote this shit out, the more I got into it, the more things I started to figure out by doing it, the less I wanted to put anything out there on the blog. I liked writing just for myself. I liked not having any expectations. I liked the silence. I had to take a break so I could do this again, and do it better than I have before.

"It's rough having a secret identity" I said to one of my colleagues.

It was cheeky and off-the-cuff, but the statement stung with truth. Putting your life out there on a blog is easy if no one knows who you are. Once those walls come down, it's much more difficult to remain honest. People fake it, people exaggerate, people write what they want others to hear. That's something I've never done, nor ever want to do here. I've built walls and moats and more walls still around this space when it comes to my family and some of them continue to find new ways of leaping over them. So it's harder for me to write about stuff like tripping on liquid acid in Golden Gate Park knowing my mother's going to read it and give me a troubled look the next time I see her. You'll have to wait for the Truckin' story on that one.

The Artist's Way lists twenty commonly held negative beliefs. "I can't be a successful artist because..."

2. I will hurt my friends and family
6. I don't have good enough ideas.
20. If I haven't become a fully functioning artist yet, I never will.

The good news, is I have put seventeen of those twenty to rest.

Still working on those last three.

I've always admired your foresight in building those walls and moats and how it did allow you be open and honest. Even when I've tried to do the same I'm always checking over my shoulder for who might be coming up behind. It's truly crippling.

Good luck tackling the last 3 of those beliefs. For what it's worth, I think you can safely knock #6 off the list.

Of course there is just one reason you can be a successful artist, and the truth of it trumps the tiny twenty.

GL and welcome back.

You are a wonderful woman and Pauly is sooo lucky.

Change I love the room - so gorgeous and put together with loving care - clearly the room is full of good energy!!!