Can I Run Good? 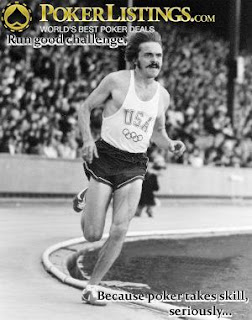 Over the last few weeks I've been participating in a very cool tournament series, sponsored by those wacky Canucks at Poker Listings. I was one of twelve invited bloggers to participate in their Run-Good Challenge, a series of four freeroll tournaments on Poker Stars where the top three walk away with free money.

In the first week's installment, I played on about 90 minutes of sleep after staying up all night to cover a WCOOP Event. Naturally, I was Gigli, but Pauly came in second to the runnin' really good Dan Skolovy of Poker Listings, who took it down. Only poor Dan can't claim any of the prize money, so his $600 first prize was rolled over into the next event's prize pool.

I did better the second week, playing from Barcelona. I finished third, good for an extra $160 in my Stars account. Unfortunately, I knocked out Pauly on the bubble. He hated me there for a good three hours. I picked up a few points too-- at least now I didn't look like a total retard.

Third time wasn't exactly the charm, as I went out I believe in 10th when I tried a stop-n-go against Shamus, shoving on a queen-high raggedy flop with A-K. He called with Q-J and I was out.

The top 6 in points advance to next week's Grand Finale, which is conveniently (for me) held on one of my days off from covering the WSOP-Europe. I was sure I was out of the running until I saw that Spaceman (who similarly slept through Event #1 due to WCOOP vampire hours) didn't finish in the money in Event #3, leaving us tied for the last spot. We're gonna have to duke it out mano-a-mano in a heads-up SNG on Stars later this week to break the tie.

The other blogging luminaries advancing to the final include Short-Stacked Shamus, Dan Skolovy, Pauly, Amy Calistri, and everyone's favorite cougar, Michele Lewis who advanced to the final despite being temporarily displaced from her home by Hurricane Ike.

And... either myself or Spaceman. I'm comin' for ya Tennessee boy...

Thanks so much to the Listings guys for putting this on. There will be future editions, I'm told so stay tuned.
Posted by change100 at 8:58 AM