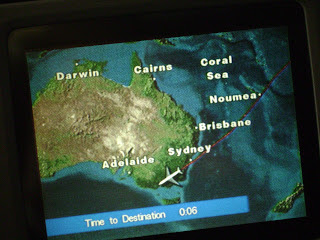 Almost there
"I'm sorry, there are no window or aisle seats available."

"Whaaaat?" Flashbacks of being completely unable to move on that Amsterdam-LAX flight last month instantly plagued me.

"I can only give you a middle seat."

"Look, I called the airline earlier to get a seat, but they said I'd have to do it at the airport, and here we are, 2 1/2 hours early to do just that."

Apparently, arriving at the Qantas desk 10 1/2 hours before one's scheduled departure is the only way to ensure an aisle seat for the 15 1/2 hour trek from Los Angeles to Melbourne. I was absolutely ready to cry. Or scream. Or throttle this woman.

"How much would it cost to upgrade her to business class?" Pauly asked as he dug into his pocket, ready to pull out his gangsta bankroll. My eyes went wide.

"You're looking at about $3,000-$4,000 between the ticket change costs and the cost of the upgrade" spat the airline wench. A grand gesture on the part of my beloved... but it wasn't exactly practical.
"Well, if I'm stuck in a middle seat, could I at least have the middle seat next to him?" I said, pointing to Pauly.

"No, it's not available. It's a completely full flight."

"I'll take the middle seat, she'll have the aisle" Pauly said to the airline wench.

"No, don't do that. Just leave it as it is" I told her with eyes blazing, calling upon all my powers of patience to not flip out in the middle of the airport.

"You're six feet tall. I'm not. It would be a lot worse for you. And I know how bad those middle seats are and you're not going to be able to sleep at all. At least I can drug myself into a stupor."

I silently fumed all the way through the security line and through the hour plus we waited at the gate. This was not how I wanted my first trip to Australia to begin. Pauly, gentelman that he is, must have offered to switch seats with me another dozen times before we boarded the plane, but I declined every time.

Once on board, the spacial situation in the middle seat was just as bad as I expected. The old guy who had the window refused to put either of his two bulky carry-on bags in the overhead compartment, despite the flight attendant's and my urging to do so. Naturally, some of his crap ended up underneath the seat in front of me. He also brought this seat cover thing with him that looked more like an inflatable raft. He sat there blowing into the tubes for thirty minutes before we took off.

At least there were no screaming babies or old women who smelled bad. I popped two Xanax and was out cold before the plane left the ground. I woke up near Hawaii and popped two more, knocking me out for another 6-7 hours. The only way I was going to survive this flight was if I was completely unconscious.

I finally woke up somewhere over the South Pacific and watched Ocean's 13 and a couple of episodes of The Office. I visited Pauly across the plane and discovered that he hadn't slept at all. See why I let him keep the aisle? Being awake and in the middle seat is just too much for anyone to bear.

"How do you manage to sleep so well on these flights?" asked the sixtyish woman in the aisle seat next to me.

At Melbourne airport, we got flagged for a full search at customs. In the box on the immigration card where it asks where you'll be staying in Australia, we both put the Crown Casino. Apparently this raised some eyebrows. The security dude asked both of us how much cash we had on us.

"You wanna see?" said Pauly, semi-bluffing, as he reached into his jeans pocket.

Once he discovered that the two of us combined had less than the $10,000 per person limit on cash, he pulled out one of those swabbing devices.

"Do you know what this is?" he asked Pauly.

"Yeah, you're going to check for explosives and stuff."

"No. For drugs. Do you have any drugs in this bag?"

Pauly thought about telling him about going to Amsterdam last month but wisely said "no." I held my breath as he swabbed Pauly’s bag. Thank God he didn’t go near mine.

Five minutes later we were in a cab on the way to the Crown. I was still super-groggy from the Xannies as we sped down the freeway into central Melbourne.

Our room at the Crown is pretty swank. It's big and roomy and has a view of the city and the Yarra River. The king bed is super-fluffy and the bathroom the size of some NYC apartments. Pauly checked out the TV channels and was stoked that Fox Sports carries the NFL games and the MLB playoffs.

The three-hour nap we intended to take turned into seven. We woke up as the sun was setting and got showered and dressed. Pauly took me on a tour of the whole Crown Complex. He knew his way around from his time at the Aussie Millions in January. This place is HUGE. The casino is as big as some Vegas properties and there are tons of shops and places to eat. The poker room is enormous and was decked out with signage for the Poker News Cup. There's a main room where mid-limit NLHE, LHE, and PLO is spread and a whole other room filled with about 15 of the PokerTek "Poker Pro" automated dealerless tables, that spread lower limits.

After grabbing a quick beer at the sportsbook bar, we met Schecky (our editor), Gaz, and Cory-Ann (Poker News marketing gurus) for dinner at Nobu. Gaz knew the chef and he prepared a special tasting menu for the five of us. I'd been to Nobu before, in L.A. and Vegas, but had never eaten like this.

For the first course, we had sashimi tacos, filled with lobster, crab, salmon, and whitefish topped with a spicy salsa, as well as Nobu's signature yellowtail carpaccio with ponzu and jalapeno slices. Heaven. Next, we were served a plate of oysters topped with a nest of crispy onion and caviar. I'm not even a big oyster fan but these were absolutely sublime. Two signature Nobu dishes arrived for the second course—crispy rock shrimp (Schecky's personal favorite) and the black miso-glazed cod. That cod is a desert island dish for me-- the fish was sweet, perfectly prepared, and melted in my mouth.

For the main course, we were each served a trio of beef. On the left was a dumpling with sesame sauce, in the middle were miso-glazed slices of kobe beef, and on the right was a skewer of kobe in a spicy chili sauce. As if that weren't enough, the chef prepared us a Waygu steak topped with onions and shiitakes. Waygu is like, beyond Kobe. It is the absolute pinnacle of quality, as our server explained.

"This is probably the highest-quality cut of beef in all of Australia."

I, for one believed him. I had never tasted anything like it. So much that the succulent lobster tail served alongside it was almost an afterthought. Almost.

As I said to Gaz as we all waddled out of Nobu at midnight, our bellies completely stuffed, "this was one of the great meals of my life."

Not a bad start to my 20 days down under. What middle seat? 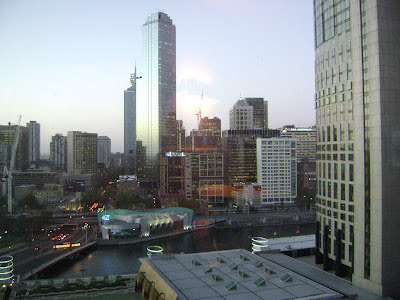 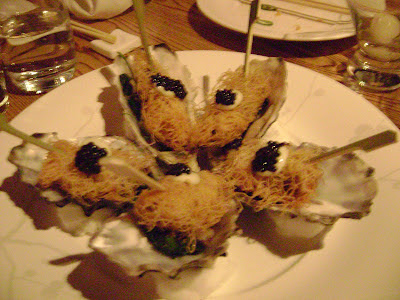 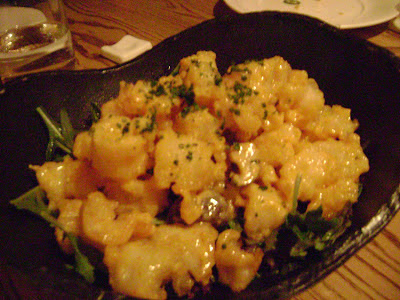 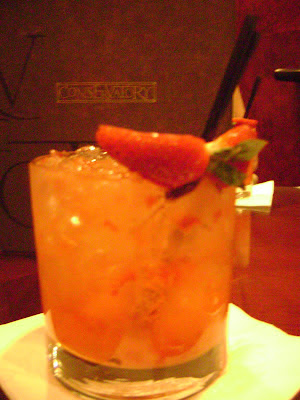 Whoa - you have the worst plane luck!

The Nobu meal sounds divine. Hope the rest of the trip is as good!