My Morning Jacket at the Fillmore, NYE 2006 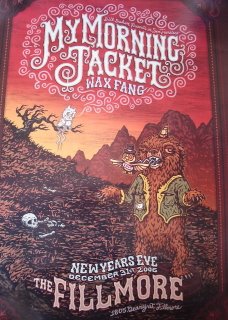 "OH MY GOD!" sqeualed the blonde girl in the white fur bolero jacket. "Are you LOVING IT?" It was still forty minutes to midnight and My Morning Jacket wasn't even halfway through their first set. Her eyes were saucers as Jim James slammed into the chorus of "Off the Record."

"OH MY GOD!" I squealed right back. "It's AMAZING!" The drugs had taken ahold of my senses in the best way possible and I wondered if I could ever stop dancing.

"Oh look! I have to go ride that pony!" Twenty feet away, a hobby horse bobbed up and down at the edge of the crowd and she took off in that general direction, never to be seen again that night, at least by me.

The freaks were out in San Francisco that night, and the regular folks had their annual excuse to get freaky. It was New Years fuckin' Eve, dammit.

Pauly and I drove up from L.A that afternoon and checked into the lovely Cartwright Hotel on Nob Hill. After cracking open a bottle of Moet courtesy of Showcase, we set out on a nearly two-mile walk down Geary Street to one of the great historic west coast music venues-- the Fillmore. Low lit. Wood-paneled. Those still-glittering chandeliers hanging from the ceiling. The ghosts of Janis Joplin, Jerry Garcia, and Jimi Hendrix haunting the place. Scrims softly painted with red-leaved trees hung along the walls and across the front of the stage. Between the forest landscapes, the snow machines that burst to life as the opening chords of "One Big Holiday" sounded, and the Fillmore's most excellent ventilation system, it almost felt like we were outside. Or... maybe I was just on drugs.

Raw. Intense. Thick. Dark. These were the words swirling through my head as MMJ tore through an energetic first set that included "What a Wonderful Man," "Gideon," "Lay Low," and "Golden." There was a whole "Oregon Trail" theme to the show, including an intro/outro where the band gathered around a campfire dressed in buckskins and cowboy hats, Indian headdresses and coonskin caps and enacted a bizzare scenario reminiscent of the Donner Party, which concluded in them collectively deciding to shoot the bassist, Two-Tone Tom (dressed in a bear suit) and eat him. Though most of the band shed their costumes after that little bit of theatre, Jim James would don his oversized red foam cowboy hat again and again throughout the night, ambling across the stage like a post-modern Yosemite Sam as he twirled a cap gun in one hand and gripped his mic in the other.

Make no mistake, I love MMJ's music. But please tell me, what the fuck are those lyrics coming out of Jim James' mouth? If I had to sing "Magheetah" for you, it would sound something like this:

Actual lyrics: "sittin here with me and mine. all wrapped up in a bottle of wine
little we can do... we gon see it thru somehow."

The band took a quick break at ten minutes to midnight before returning to the stage for the countdown. The opening band, Louisville's Wax Fang (who performed their set clad in cheerleader outfits and pigtails), joined MMJ onstage to sip champagne as hundreds of balloons floated down from the rafters. It was one of those magic New Year's moments-- perfect band, perfect place, time standing still in a soul-tingling midnight kiss.

I was hoping MMJ would bust out a few cover songs but was entirely unprepared and pleasantly surprised with what they turned out next. The Deerland Horns backed them up on Kool and the Gang's "Celebration," Lionel Richie's "All Night Long" George Michael's "Careless Whisper" and Prince's "I Could Never Take the Place of Your Man." Careless Whisper was insane-- it was 1991 all over again and I was back in my high school auditorium wearing a velvet Jessica McClintock dress swaying back and forth to that mournful sax solo as I wondered if Jeremy Van de Kamp really liked me. Highlights of the rest of the second set included "Phone Went West," sick versions of "Wordless Chorus" and "Dancefloors" and one final unexpected cover-- AC/DC's "Highway to Hell." Sickness.

The crowd had thinned out a bit as we headed toward the encores. A tripping hippie that looked like a cross between Al Can't Hang and Sweet Sweet Pablo danced wildly in front of us while a crunchy gentleman clutching a Budweiser nearly passed out while standing up as his eyes rolled back into his head. A very very drunk girl in a pink sweater hugged me for no apparent reason on her way out the door. "Anytime" and "Magheetah" closed the show at 1:30 A.M., over three hours after it started.

I made a bathroom run while Pauly grabbed our jackets from the coat check. When I came back out, I saw him talking to a random guy and what appeared to be his wife or girlfriend. I only had to hear the phrase "I read all your blogs, man" to realize that Pauly was in the throes of a fan encounter. At the Fillmore of all places. On New Years' Eve. Aaron was from Portland and he had seen us at the Nashville Airport with the Joker and Professional Keno Player Neil Fontenot waving the celebrity heads as we arrived for Bonnaroo last June. He and Pauly shot the shit for a moment before we parted ways and started the long walk back to the hotel. I, for one was grateful for it, as we were still buzzing from the drugs and had energy to burn.

As we walked back up Geary, every bar in San Francisco was closing. Yes, bars close at 2 A.M. in California, even on New Years' Eve. People were passing out in the streets. Walking into walls. One guy carried his unconscious girlfriend through an intersection while another puked between two parked cars. Barefoot girls in party dresses carried their high heels as they weaved their way home.

"Jesus, Pauly. For two people tripping their heads off, we really have our shit together."

Now THAT is exactly what I would expect from a Change/Pauly NYE celebration...sheer unbridled chemical-fueled extravagance! I can feel the buzz from here! Happy New Year, and I'll be watching you at your new digs, too.

Quick aside, I was flying on American when I read this in an article about poker:

“Summertime (the nickname of one of a group calling themselves the Batfaces) quickly regrets his choice (to play in the blogger tournament). “Worst decision ever,” he texts us. “Sitting between guy with Gorgon breath and a girl who introduced herself as Jane 100.”

What an awesome night! It brings back memories of my Phish millennium show.I am totally jealous. I've been to SF plenty but haven't been to the Fillmore. Happy New Year!