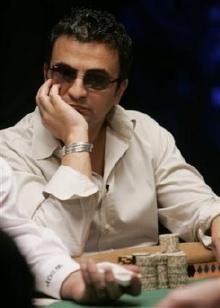 Like Greg Raymer before him, Hachem has now more than proven that he's not just a one-hit wonder with 2 WSOP final tables, a WSOPC final table, an EPT final table, and now, a WPT Championship since his $7.5 million Main Event win.

Curiously though, Hachem was one of seven poker pros who sued the World Poker Tour this summer over their "in perpetuity and throughout the universe" image release form and encouraged fellow players to join in their boycott of WPT events. The other six plaintiffs, Phil Gordon, Annie Duke, Howard Lederer, Greg Raymer, Chris Ferguson, and Andy Bloch, did not participate in this tournament, and have not played any WPT events this year.

I wonder what changed Hachem's mind about the suit? Clearly he's dropped out.

Finishing second was Jim Hanna, a tournament rookie with no major cashes on record. According to Linda Johnson's announcement from the tournament floor, his brother, professional player Mark Hanna, staked him in this event (and will get a nice return on his investment-- 2nd place paid out just shy of $1.1 million). A little Googling revealed that he also played one year of professional football, as a defensive end for the New Orleans Saints in 1994.

Some kid named Daniel Negreanu took third place and $592,000 after losing a K-T vs. 44 coinflip against Hachem. I think he's won a few tournaments before.

Finishing in 7th place was Justin "ZeeJustin" Bonomo, who added another $152,000 to his quarter-million plus haul from this tournament series. Bonomo made three preliminary event final tables over the last two weeks for an additional $116,000, though he is still best known as "the guy who cheated Party Poker by playing multiple accounts, got banned from online poker, and had all his winnings revoked." All that and he didn't even have to have his back poked by Capt. Tom's penis.

I believe I have every right to say... "Pass the sugar!"