Stars Giveth, and Stars Taketh Away 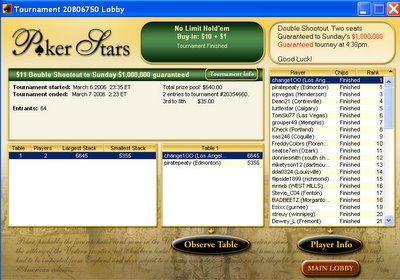 After a two-week rush of winning sessions at the 3-6 on Stars, it all came crashing down in the last four days, wherein I managed to drop 1/3 of the bankroll I have on that site via multiple tilty sessions, the kind where you shout shit like 'why can't MY draws come in!" at the screen. I'll have to go over the carnage in more detail on Pokertracker in the coming days, but it was one of those stretches where I couldn't hit a flop, couldn't hit a draw, and got runner-runnered more than I'd like to remember. We all have these stretches and they're miserable. This was no different. My tilt monster was definitely peeking out of the closet last night and I think he scared Pauly (whom I now believe is never leaving Los Angeles).

Hating limit and cursing the gods, I signed up for an $11 Double Shootout to the Stars $1M Guaranteed Sunday extravaganza, rushing back into the arms of the NL tournaments that built my current roll in the first place. Since Stars started running these, I've played maybe a dozen of them and have won my first table well over half the time, only to fuck up or get sucked out on the second table. I had mentally labeled the Turbo version a crapshoot and the longer version a waste of three fucking hours after a number of fourth and fifth place finishes.

Until now! See ya this weekend, fellow donkeys!! This girl's getting her Big Sunday Tournament Cherry popped. I plan on bringing my typically tight, cagey game with me to the table along with a big bag of ganje so God help you all.

In between sewing up my bloody wounds from LHE this week, I ground out a few nut-peddling sessions of 2-4 Omaha Hi-Lo on Stars. Even though some people claim that O8 "is not a real game," I've been slowly delving into it for the last couple of months and starting to develop it as a cash game alternative for me. Now, I've been "recognized" at the virtual tables once or twice before due to this humble slice of internet blogestate, but never by a Vegas stripper at a low-limit O8 table who claimed to have given Pauly a lap dance one night at the Crazy Horse Too. She said he was a good tipper and he inspired her to start playing poker.

You know, most of the time I smell the bullshit a mile away when online poker players claim to be strippers. But because it was Pauly, I, for one, believe her.
Posted by change100 at 9:43 AM

Congrats... but no love for the railbird??

that tournament is a behemouth. i've played that monster six times this year and have yet to finish in the money. each time i died, i got my chips in as the favorite. the PStars RNG is well tuned for bad beat suckout artists. best of luck.

I think some of that magic luckbox dust had something to do with it... ;)

Very nice. Love the avatar pic too! If I'm around I'll swing through to cheer ya on and good luck to you Change!

Nice job...I played one of those the other night and bubbled the 1st table. I really dig'em though...something about the shootout I like...

A fellow O8 fan? Let me know next time you're on and I'll play some limit with you.

I doubt you'll answer this...I doubt I would either, but is that you on the banner?

And please answer this: How is Showcases' new girlfriend?