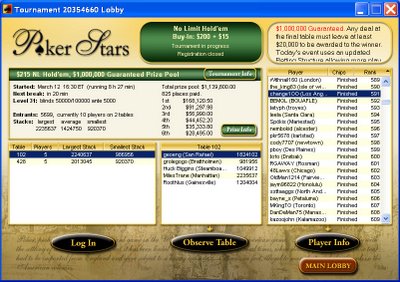 I got my bad beats out of the way early on Sunday morning. I played two NLHE SNG's on Stars to warm up for the $1 Million Guaranteed and went broke on a 4-1 favorite in one and a 3-1 favorite in another. I wasn't tilty in the least because the beats were ridiculous and I made the right moves, but nonetheless, I changed gears and fired up an $11 Omaha Hi-Lo SNG. One river gutshot later I was out. Next, I fired up a 130 FPP super satellite to the $100K VIP Freeroll. I made it through 2/3 of the field before losing my first significant coinflip with 77 vs. AQ.

But like I said...I'm glad I got this crap out of the way early. I'm not especially superstitious, but I have been seeing a bit of the worst of it lately, and having to deal with a few suckouts immediately before kickoff made me strangely confident going into the Big Sunday Stars tournament. I was due for at least a small amount of revenge.

I started channelling my suckout powers by swapping 10% with the Original Luckbox, who decided to play at the last minute. I chopped out some small pots in the first half hour, my stack hovering between 2800 and 3300. My first big decision came in a hand where I raised with KQ from MP and was called by the big blind. The flop came Q high, and he check-called my bet of 2/3 the pot. The turn came a 2 and he suddenly pushed in. I tanked for a while before making what I thought was a gutsy call. I just couldn't put him on a better hand. Turned out he only had KJ and I doubled up to over 6K in chips.

I got more aggressive and my chip count started to rollercoaster-- up to 15K when I made a full house with AK, then 24K, then back down to 15. I was starting to get cute with a big stack and needed to calm down. I got JTh in the seat right before the cutoff and raised to 1800, and the BB pushed. I called 2500 more and saw the bad news-- he had QQ. The flop gave me hope though, when it gave me an OESD, and I rivered the Ace to take it down. I was up to 20K again.

I went card-dead for a while after that and lost a horrible blinds vs. blind hand when I got aggressive from the SB with K8 on a K 9 2 flop. Turns out the BB had K9, the ultimate cooler. That hand chopped my stack in half. With 8700 left and 400-800 blinds, I pushed over the top of one limper with KJo. He insta-called with AA. Aiyah. I had him slightly covered and was down to 1900. I thought the end was near. We were still over 200 to the money.

"You can do this :-)" CJ wrote in the chat box. I chose to believe him, but I'd need some serious luck.

With 45c and no choice, I pushed from the SB. I was called by QT.

The flop came 4 4 K. No. Fucking. Way. Then, to rub some salt into my poor opponent's wounds, the turn was a T and the river a Q. CJ is magic.

I rebuilt my stack to about 8K which was good enough for me to hang on until the money. Ultimately I pushed UTG with KJo and about 7BB left. The button pushed over the top with AQ, and the flop brought both an ace and a queen. I ended up in 591st of 5699 for a $455 payday. CJ cashed as well, in 400th place for $569.

Not bad for an $11 investment and my first attempt at a big weekend tournament. I'll certainly be playing more of these in the future. Thanks to CJ, the Doc, Joe Speaker, hacker59, and all who sweated me!

Later that evening, I joined my fellow bloggers in the first WBPT Player of the Year Tournament, a $22 PLO event on Poker Stars. I have no idea how to play PLO. I read the Lyle Berman chapter of Super System once, but I was really stoned. Pauly taught me some starting hands and I heard that it's wise to only draw to the nuts. That's really all I know.

But I guess it's all really most of us know. I managed to make it through half the field to finish 28th of 56 entrants. I would have gone further had my AAK2 not been runner-runnered by Max's KKQ8 hitting a straight! Poker Geek managed to finish ahead of me simply by sitting out. Thakfully both of us qualify for POY points.

Congrats to STB for taking it down! That's two victories this week for our favorite beer-swilling Wisconsan!

Check out the Tao of Pauly if you haven't already and check out Pauly's photos from his trip out here. He makes my city look mighty pretty. My favorites are from Zuma Beach, though I'm also a fan of the one of the ominous dark clouds behind the palm trees along 6th Street. He took that one in Koreatown when we were driving back to the westside after lunch downtown with Joe Speaker. The sky looked a lot like that today.

Tomorrow is Monday. Showcase will awaken at 8 AM and quite literally start screaming "Nooooo! Noooo! Noooo!" to the walls as he faces the reality that he has to go to work in his sterile little cubicle and I get to sleep in until 11. But I'm slowly getting back on the horse. I have a couple of meetings this week and we'll see where those lead. This week my real hope is that I can discipline myself to write something every day. I'll start with that.

That, and I need to find a dentist before my insurance runs out. I think I have some wisdom teeth that need extracting.
Posted by change100 at 9:55 PM

Sorry again for the runner-runner suckout. Even though that made us even at 1 each, I didn't want to put you out that way.

Thanks for the shoutout Change! Nice cash for yourself as well.

Anything I can do to help my lucky blonde ;-)

i checked stars last night and saw that you cashed. that wheel barrow of luckbox dust came in handy. good job girl.

You could write in your blog every day. That would be something to write every day!

Congrats on the cash.