Bahama Pauly or Why Rum Is Evil, a semi-live blog 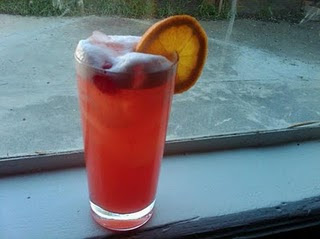 I feel responsible that my boyfriend is addicted to coconut rum and well on his way to becoming a raging alcoholic. After all, I was the one who took him to the islands and got him hooked on the sweet pink nectar that is a Bahama Mama. Pauly makes them just as well as any Atlantis bartender after practicing relentlessly in our kitchen this weekend as the NFL's "final four" played out. Pauly's friend Chicago Bob joined us for the games, watching in agony as his Bears fell to the Packers in the first half of the afternoon. As the Jets-Steelers game approached, Pauly's Bahama Mama consumption soared to new heights, coating his usual hair-pulling and pacing act in a thick layer of high fructose corn syrup and Malibu Rum.

11:31am: First Bahama Mama is mixed. Shaken, not stirred. Mine is half-strength since I'm grinding Sunday tourneys.

12:24pm: Pauly babbles about how he decided to bet Green Bay because he heard about some multi-million dollar bets on the Packers that were just placed at a Central American sportsbook.

1:05pm: I'm already out of three tourneys after running into three sets. It was bound to happen. So I buy into two more.

1:35pm: Jay Cutler gets sacked. Pauly says it's because he has sand in his vag.

2:15 pm: Pauly is on his third B.M. "If we survive the apocalypse, I'll gladly start a sportsbook with you in Costa Rica," he says as Chicago Bob anguishes over the Bears offense.

2:45pm: Some dude none of us has ever heard of is now playing QB for the Bears. Chicago Bob says "We're done."

3:16pm: Out of the Stars $11 rebuy. KK falls to AA. The lesson here is that a four-betting Brazilian always has it. I was taught that lesson last week, but I obviously didn't learn.

3:40pm: Kickoff in the Jets-Steelers game. Pauly is on his sixth Bahama Mama.

4:30pm: Jets lay an egg in the first quarter. Why did I become a Jets fan again?

5:15pm: Pauly decides to invade the Ivory Coast. Mumbles something about a power vacuum and needing a cop car to corner the cocoa market. "Once we have the military's cooperation, the cocoa fields are ours!"

5:17pm: Pauly tells Chicago Bob they are buying more cocoa futures in the morning. Surprisingly, Bob does not disagree.

5:20pm: Discussion of cocoa futures reverts back to their plan to manipulate the mortgage market.

5:39pm: Fuckin' A. Out of the $18K Super Stack and the Double Deuce just short of the money in both.

6:05pm: First incidence of Pauly walking outside because he can't handle the pressure.

6:08pm: Pauly walks back inside and immediately bangs into a chair.

6:29pm:More mortgage fraud discussion. Chicago Bob: "If you're a fruit picker making $14,000 a year and you're kicked out of your $700,000 house after putting no money down, you didn't lose ANYTHING!"

6:41pm: Pauly begins banging his head against a closet door.

6:50pm: The Jets lose. Rapelesberger & Co. advance to the Super Bowl. So this is what it's like to be a Jets fan. Pauly owes Mean Gene a 4x4 and a chocolate shake from In & Out Burger payable at the 2011 WSOP.

7:21pm: Pauly and I begin discussing what to eat for dinner.

7:26pm: Pauly decides to speak in a British accent while giving me his order for the local pita joint.

7:41pm: Me: You only drink to kill your feelings. Him: Well, I'd better drink more then!

8:15pm: I return to the apartment with our food. Pauly inhales a garlic chicken panini but only makes it halfway through his chicken kebab wrap. We both note the exceptionally phallic shape of said wrap.

8:30pm: Pauly passes out sitting up on the couch while watching a documentary about Nazis narrated by Rob Lowe.

8:45pm: He suddenly wakes, demanding a glass of water, two Motrin, and the remainder of his "penis sandwich" before passing out 30 seconds later.

9:28pm: I conclude that Pauly is out for the night and store his leftover sandwich in the fridge before turning down the bed for him.

Tell Pauly to stop drinking Girlie drinks. I remember those from my Honeymoon. :). PLEASE do not become a Jets fan!

I love drinking with Paulie.

I hope you guys make it to Red Rock for March Madness for old times sake.

For the record, I never called for "the invasion" of the Ivory Coast. I was merely suggesting that we take advantage of the current power vacuum and shaky political climate and attempt to manipulate price swings in the cocoa market for our financial gain.

There is so much win in this. I think a Key West Bash needs to happen again, but this time with more rum.

Yes, my songwriting career never took off for some reason.