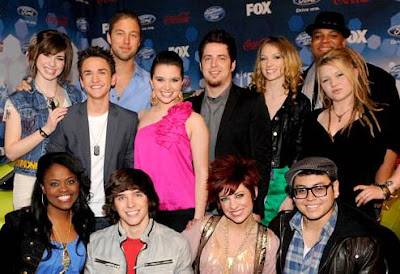 This is your Top 12, America. How could you?
Last night on American Idol, the Top 12 took on the music of the Rolling Stones. Are these kids even old enough to know who the Rolling Stones are? As I sat there, waiting for the first teenage train wreck to take the stage, I told Pauly that I thought this choice for theme-of-the-week was both good and bad. We were going to hear good songs, even some great songs, but whom among this bunch could even come close to the swagger and drama of Mick Jagger? Could any of these girls turn in a cover of "Paint it Black" that would even come close to the neighborhood of Grace Potter's electrifying version?

Well, I'd be right on one account and wrong on the other. Let's look at last night's performances:

Michael Lynche, "Miss You": Lynche may have stage presence to spare and an easy engagement with the audience, but the vocal on this was so sub-par, punctuated with gasps and hoots straight out of thfe Michael Jackson playbook. The judges jizzed all over it,fff but thankfully Cowell got real and called him out on the "corny" dance moves and affectations.

Didi Benami "Play with Fire": This was a very good song choice but such a strange lyric for Didi, because she is anything but fiery. Didi is more like a lemon tart or some sort of delicate dessert. She did get to open up her vocals big-time in this performance and it was something she really needed to do in order to pick up some votes. The vocals were there, but unfortunately the emotion was only at about half-speed. Oh, and Didi? Struggling for four years in L.A. is NOTHIN' kiddo. Nothing at all. You're here four years and you're aleady in the Top 12 of American Idol? You are fucking blessed.

Casey James "It's All Over Now": I liked the guitar riffs and the blues sound he brought to the song but I'm not gaga over this dude. It was fine enough, and you know he'll move on to next week but... meh? Holy shit, is Simon wearing a cardigan?

Lacey Brown "Ruby Tuesday": Wait a minute. This chick is still on this show? And her parents are pastors? And I've so heard a cover just like this on YouTube hundreds of times. Hold on... why is she sitting down on the egde of the stage? Did she hurt herself? This was a very one-note performance for me. In terms of the arrangement, we needed to see more dynamics and range from her, not just the cutesy lilting vocal shtick that has carried her this far. Still, this was probably her best performance since Hollywood Week. Can you feel the warmth from me for this girl?

Andrew Garcia "Gimme Shelter": Moreno Valley Gangland Boy still hasn't delivered since his genius cover of Paula Abdul's "Straight Up" and...wait a minute... Randy Jackson is wearing a cardigan too? A lavender one? I liked his intentions with the arrangement which took the song an unexpected pop direction, but despite what I truly believe were his best efforts, Garcia just couldn't pull off this vocal. I mean Christ on a cracker, that thing is a mountain to climb.

Katie Stevens "Wild Horses": Oh, heavens. How is this sweet little underage thing going to sing the Stones? And why in God's name did she pick the song Simon just recorded with that batshit crazy Scottish chick who won Britain's Got Talent? And why is her interpretation of "be young" a floral tea party dress and pearl-accented jewelry? Stevens' performance was so high-school talent show I wanted to turn on some Ani DiFranco and self-mutilate. Seriously, this chick and not Lily Scott, America? You're all on crack. When your chosen ingenue is completely outdone by a 48-year old virgin with a monobrow, something just isn't right.

Tim Urban "Under My Thumb": Oh fuck. This kid's still in it too? The reggae-inspired arrangement did nothing more for me than make me want to smoke more marijuana than I'd already consumed in the seventy minutes I'd been watching this drivel. I didn't get it either, Randy.
Siobhan Magnus "Paint it Black": So one of the girls did take on "Paint it Black" and thank you Jesus for letting it be Siobhan. I love this girl. She's like, a total home-schooled freakshow artiste and it's amazing. This was a standout moment for her-- a gutsy, rangy performance that didn't compromise her personal style. This performance was kind of like what would happen if Bjork and Aretha Franklin's love child sang this song. I loved the quiet, waltz-y string intro, and I loved the drama she brought to the climax with that insaaaanely high belt.
Lee Dewyze "Beast of Burden": If you close your eyes, this could have been a Jack Johnson or Dave Mattehews Band single. Dewyze delivered with a contemporary, acoustic take on the song with poppy vocal riffs. This shit is a lotta people's cup of tea and I think Lee knows it. Sure it was a safe choice, but he's not in a situation right now where he really needs to take a risk in order to pick up votes.

Paige Miles "Honky-Tonk Woman": Are you serious? This chick is still here too? Tonight we heard some of those vocals that got her this far, but Paige is still wayyy too cruise ship with her performance elements. She has a voice that deserves a place in the Top 12, but completely lacks a style to go with it.

Aaron Kelly "Angie": Why do I get the impression that the only Angie this kid is ever going to get close to has a penis under his skirt?

Crystal Bowersox "You Can't Always Get What You Want": I don't know what the judges were smoking, but I thought Wookie Girl blew the doors off the place. Coming into this week she was (and still is) one of the clear front-runners, but I have to believe that the judges' critiscism was something akin to a teacher grading an "A" student even harder, just to push her to her potential. This performance, along with Siobhan's are the only ones worthy of downloading this week IMO. I also love that Wookie Girl exchanged hippie gifts with Lily Scott and has her feather attached to one of her dreads. Gah, Lily could have killed a Stones song!
Please please stay: Crystal Bowersox, Siobhan Magnus, Didi Benami
Go away! : Tim Urban, Katie Stevens
I'll leave you all with Wookie Girl's performance from last night, which starts around the 0:36 mark:

If Bowersox isn't clearly the one to beat, the show's got issues. I think your theory is right about the judges. As Simon has said to her, "it's yours to lose."

She also has meth teeth too, but man, she can sing.

pauly posted on Coventry that you asked him to bet on Crystal... i think there is value in Didi, Andrew, and Lee. and i think Casey is overpriced.