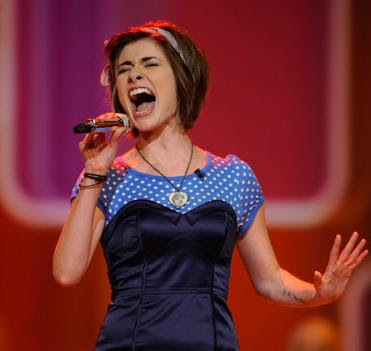 If American Idol was a poker tournament, this week would be the money bubble. Of the 11 remaining contestants, 10 will make the American Idols Live summer tour and guarantee themselves a payday in the $200,000 range. While it's not exactly a sum to retire on, it's a huge boost for a struggling musician and it could go a long way toward financing their art over the next several years if they spend it wisely. Simon Cowell started the show with an ominous warning, telling his little lambs that "it's absolutely the worst night to go" right as they're lead to potential slaughter. If there is a God up there listening, please let it be Tim Urban or that little gay kid.

The Idols also met their first professional "mentor" tonight. And those honors went to... Miley Cyrus? A twelfth-grader fond of flashing her underwear in front of her iPhone camera and dressing like a hooker? What, the Jonas Brothers weren't available?
In a departure from last week's downright specific theme (sing a Rolling Stones song), this week the contestants had all 116 years of Billboard #1 hits at their disposal. Despite the range and depth of song choices available to them, most of the Idols completely whiffed on song choices, turning this week's two-hour performance episode into a never-ending set at some horrifying karaoke bar. Yes, this could possibly be the Worst. Episode. Ever. and if it weren't for Wookie Girl and that little wail-in-a-box Siobhan Magnus, I might have flipped over to the new episode of 90210.

Lee Dewyze "The Letter": I totally didn't get the Rat Pack direction he went in tonight. Why not stay with the rootsy style that was working for him? Dewyze has great vocals and should have picked a song where they could shine instead of crowding the stage with a horn section and a trio of backup singers. Throwing up all these other stage elements to take the focus off himself is totally counter-intuitive at this point in the competition. Does he think he needs some flash to make up for his lack of charisma? Ding ding ding! Dewyze needs to find some panache in a hurry if he's really going to make a go of a career. Although, American Idol has certainly launched bores in the past. Carrie Underwood anyone?
Paige Miles "Against All Odds": Honey I'd be worried about those heels too. And I'd be even more worried about your song choice. A sleepy 80's ballad sung seated on the stairs? This was one of the most off-key, utterly tone-deaf performances in the last few seasons. Miles has this lovely mezzo belt-- why pick a song that falls right in its break? I was looking for the fast-forward button by the one-minute mark.

Tim Urban "Crazy Little Thing Called Love": Wow. I didn't think anyone could stink up the joint any worse than Paige Miles did, but Urban came close. This was Cheesy Dated Teen Idol Crap. Going out into the audience to be surrounded by one's adoring fans is so incredibly presumptuous at this stage. Vote for the Worst is going to have a field day with this one (and apparently a few got in to the audience).

Aaron Kelly "I Don't Want to Miss a Thing" :Oh, sweetie. Your "crush" on Miley isn't convincing any of us. And she only dates 23-year old underwear models anyway. Performances like this one are the moments on American Idol that make me want to shoot myself. It's not camp, it's not good music, it's bland poppy shit that teenage girls like. Even if we're talking about him in the context of that genre (and unfortunately, it is a genre), Kelly's high notes are nowhere near anything Clay Aiken or even David Archuleta can do.

Crystal Bowersox "Me and Bobby McGee": Wookie Girl unfortunately ruined her street cred when she had Miley Cyrus sign her guitar. She's gonna catch some shit for that. Hey, I have that dress. And I like her hair up. As for the song, well, I think she should have trusted her instincts and left it in the lower key instead of listening to Miley Fucking Cyrus. But it was a great choice for her and firmly in her wheelhouse. Keep bringing it, Wookie Girl! Hey, she's got a carpet! Just like Phish. Hey Seacrest, sit down. Wanna smoke a bowl?

Michael Lynche "When a Man Loves a Woman" Another snoooooozy song that is noooooot contemporary and sooooo cruise ship. I really want to like this guy but gah, I'm so sick of the lame, familiar song choices. This dude is an R&B beast-- find some freakin' deep cuts or you won't be able to compete with this bunch.

Andrew Garcia "I Heard it Through the Grapevine" Jesus Christ. Another cheesy, loungey arrangement. Shoot me now. Andrew, don't take advice from Miley Fucking Cyrus. Keep that guitar in your arms. This kind of shtick doesn't work for you. After tonight, I'm even more confused about this guy. I also told myself that I'd take a bong hit if any of the judges invoke his performance of "Straight Up." Gah! Kara just said it!

Katie Stevens "Big Girls Don't Cry" Was I hallucinating that she had a bigger voice than what I've hear so far from this girl? This was pitchy all over the place, completely oversung, and... yeah, basically nails on a chalkboard. This wasn't a preview of a hot new recording artist, its was more like a high school talent show performance from the head choirgirl. And I used to BE the head choirgirl. So put that in your pipe and smoke it.

Casey James "The Power of Love" OK...was it a requirement that a minimum number of contestants utilize the sunglassed horn section? I usually say that everything is better with horns, but in this case, it totally cheesed up the arrangement. This was nothing but bad 80's cover band shizzle. Seriously, can any of these kids pick a song?

Didi Benami "You're No Good" I love how Didi pronounces like four out of five vowels on each syllable. Her high notes were a bit sharp, but at least the arrangement wasn't the bad lounge act like some of her competitors. She took their note about creating drama a bit literally and guess what? Now the judges want her to go back to being "herself." But... they thought that what she did before was boring? See how easy it is to lose your mind?

Siobhan Magnus "Superstition" I laughed out loud when Magnus said"I think it's wicked cool she said my voice has swagger!" when talking about meeting Miley. But gurrrrrl, WTF is with that outfit? Unlike you, I was actually alive in 1984 and that was almost too authentic. Now, a word about her "wail-in-a-box." You know, that obscenely high belt/scream. I get Cowell's point about the high G's and A's. You can't trot that shit out every time. And you shouldn't. You can't hit those things every day of your life at 100% or your voice will be shot in five years. It's still goddamned impressive, though. I'm not knocking it. Just let it be an element of surprise rather than an element we expect every time.
Please, please stay: Wookie Girl, Wail-in-a-Box
Go away. Now: Tim Urban, Paige Miles, Katie Stevens
Posted by change100 at 1:02 PM

I did not watch last night's Idol so have no clue if your opinion is spot on or you were having your crankiest night ever!

Giving you the benefit of the doubt that last night was truly awful is there a reason to watch rest of season?

I hit fast forward for Paige and Tim but really want Paige gone tonight. There is nothing about her that I like. All I can say about song choice is that they all need some serious help. Most of the songs were so wrong!

I have never watched a single episode of AI, but I love your reports.

In other news, I have no life.

Simply the worst night ever. Totally. I was really hoping that the judge "save card" could reworked and have more people removed from the show. Paige deserved to go, that performance was horrific.

I've never watched an episode of American Idol (no, not even a femto-second) but that lead-in photo scared me.