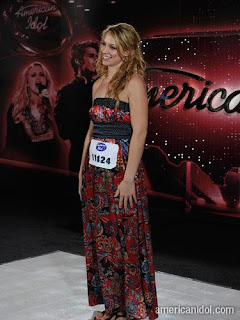 Didi Benami, among the Season 9 front-runners after her Hollywood Week performance
It's OK, you can put down the razor blades. The auditions are over. There are no more 19-year old single mothers with sick aunts and learning disabilities for FOX to tug at the nation's heartstrings with. The lucky 181 that left their audition cities with those precious golden tickets arrived in Hollywood this week and the requisite chewing-up-and-spitting out by Simon Cowell & Co. began in earnest.

You knew some of these poor saps had no chance of making it. Vanessa "I ain't never been on an aeroplane" Wolfe showed some country charm in her initial audition, but completely blew it in Hollywood with a tone-deaf rendition of Blind Melon's "No Rain" that sent every pampered Shih-tzu in the Hollywood Hills into a fit of agonizing howls. By the end of the first round, she was back on that aeroplane on her way back to her hick town along with so many others who shared their sob stories in the audition round.

Skiiboski, he of the five felony arrests in the state of Florida? It's the end of the line, baby.

Megan Wright, who charmed the judges with her precocious little brother? Sorry, love.

Whip girl? The Jersey sisters? The dude who did the splits and ripped his pants? Freaky beat-box boy? All goners.

Although many of the contestants weren't able to hit the bar they set for themselves at their initial audition, there were plenty who sailed right over it. Lilly Scott picked up a guitar and killed Ella Fitzgerald's "Lullaby of Birdland." Casey James turned out to be a sick blues singer. And wookette Crystal Bowersox blew the doors off the Kodak with a performance of "Natural Woman" that recalled Kelly Clarkson's star-making turn on the same tune during Season 1. And Andrew Garcia did the best rendition of Paula Abdul's "Straight Up" since Showcase played it solo on the trumpet at his Bar Mitzvah.

For the 96 Idol hopefuls that survived the first cut, the dreaded Group Round awaited. In this stage, it's not so much about how the singers perform individually, it's about how well they can learn a piece of music quickly, work with others, and handle simple choreography. After all, they're going to have to shoot all those Ford commercials and perform those dreadful group numbers.

Naturally there was a girl group that couldn't get their shit together, some seriously mangled lyrics, and at least one idiot who embarrassed himself further by asking the judges for one more chance after he was cut. I was rooting for the quirky Denver group "The Mighty Rangers" who dressed like they were about to rage in the lot of a Disco Biscuits show, but their performance ended up a total trainwreck.

And just to prove my heart isn't completely blackened, I did think it was quite touching to watch Michael Lynche watch the birth of his baby daughter over an iPhone. Steve Jobs can't buy better publicity than that.

Surprise of the week? Ellen DeGeneres is a pretty good judge. She injects just the right amount of levity to the process, while maintaining a realistic outlook . I loved it when she fucked with the contestants, telling them to step forwards and backwards.

Next week, there will be more bloodshed as the 71 remaining Idols are narrowed down to the Top 24. Get your knives out, Hollywood.

UPDATE: I just got off the phone with Showcase. He couldn't believe that I didn't remember that Didi Benami used to live in the building next door to us. After a bit of memory-jogging I did recall the other blonde singer who lived with Angelina during her tumultuous breakup with her cokehead boyfriend. She was pale and thin and seemed lost amidst all the drama. She moved out after a few months and apparently, it did her a world of good.
Posted by change100 at 5:18 PM

I was very skeptical about Ellen after her very lame night as a judge on SYTYCD a year or so ago. But I agree, she did a good job and adds to the panel. I loved the chick with dreads and the dad who sang Straight Up, as well as 16 year old with grandma w/ Alzheimer's.

+1 on the recap. I loved the wookette she was one of my fav females as was the cute black gal with the flower in her hair. and one of my favorite dudes was the blond pony tailed guy who sings the blues.

I havent watched idol faithfully since the Clay/Ruben days but Im going to try to catch it going forward.

Wow... I had no idea that was our former neighbor.