How I Puked in Becca’s Airplane 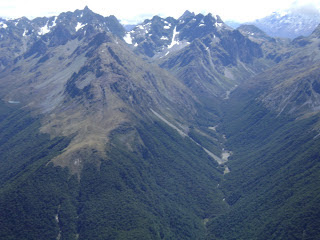 There's one on every corner. Some sort of adventure to be had. Kayaking and canoeing. Skydiving. Parasailing. Paragliding. Bungy jumping. Jet-boat trips. A street luge. Sailing excursions. Skiing in the wintertime. Helicopters that land on a glacier for you. Walking one block in Queenstown, New Zealand presents a traveler with all of these options, and everyone you'll see there is doing something remotely outdoorsy or is at least thinking about it. They ride bikes. They wear backpacks. There are a lot of stores that sell those athletic sandals that I really hate and a lot of people wear them around town in between their outdoorsy activities. They don't call it the adventure capital of the world for nothing.

We'd talked about the prospect of bungy jumping for weeks. In my mind, I was completely against it one day and totally game the next. However, once I rode up Bob's Peak in the Queenstown Sky Gondola and passed the actual ledge I was contemplating hurling myself off of, I made up my mind instantly. Yeah, I wouldn't be doing any of that. It sounded fun in principle, but in that moment I knew I'd get myself all harnessed up and in the stupid suit and helmet and everything and would be that girl who just couldn't bring herself to jump. I rode a street luge with great speed and abandon, but that was probably as far as my "adventure" was going to go.

Several of our Kiwi friends, including Jules' hubby Graham, had recommended we check out Milford Sound while we were on the South Island. Our guidebook even crowned it the "Eighth Wonder of the World." I was intrigued and it didn't look too far from Queenstown. Seeing it properly did, however involve flying-- namely in a tiny airplane followed by a helicopter. Though I've had a streak of bad karma lately in terms of my seat locations and the quality of my seat companions on recent international long-haul flights, I've been able to cope with the "fear" element of flying quite well as of late, primarily due to a robust supply of Xanax. I could do this. Pauly even said he'd buy my flight for me as an early Valentine's Day present. We popped into a Flight Centre on Shotover Street and booked our tickets for the next day.

We ordered room service in the morning so we'd be properly sated for our day out. I got oatmeal and fruit while Pauly had eggs and lamb sausage (which I sampled-- not too bad). We called to check on the weather at 9 a.m. and were told that it looked a bit doubtful, but that we should hop on the shuttle van and come down to the airport anyway. The van picked us up in front of our hotel and there were three retired couples seated inside. They were all my parents' age or a little older. I tried to picture my mom and dad tramping around New Zealand and couldn't. Their idea of adventure is the Sheraton in Maui.

Once we got to the airport we got the bad news that our 10 AM flight was grounded due to the weather. Being it's a scenic flight, any cloud cover sort of puts a damper on things. We did have the option to re-book for 12 PM or 2 PM. We went for 12 and caught a ride back to the hotel, where we waited out the delay by playing Chinese Poker in the courtyard.

Back at the airport, we were told that our flight would go off, but we'd be unable to take the helicopter back. Instead we'd fly to Milford Sound, take a 2-hour cruise, and then fly back to Queenstown. I was cool with that. We met Becca, a pretty brunette in her mid-20's who would be our pilot. Two of the three retired couples rounded out our party as we walked out to the tarmac and met our plane. 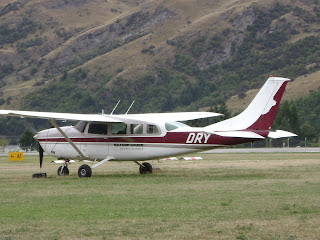 That's the plane. It really did say DRY on the side. All of the planes had clever little three-letter names including WET and SEX.

Becca could tell I was nervous. I guess it was pretty obvious. One of the two older ladies on our flight introduced herself to me. Her name was Carol and she was from the U.K.

"You'll be fine, love. There's nothing to be afraid of" she said in a comforting lilt.

I sat in the middle row of the 7-seat plane while Pauly happily took the co-pilot's seat next to Becca. We all put on noise-reducing headphones that we'd leave on for the entire flight. We'd also be able to hear Becca over the headphones, telling us what things were. I took inventory of the seat pocket in front of me, finding a safety card and a barf bag. I pulled the bag out just slightly, ensuring easy access if anything were to go suddenly wrong. It's a ritual I've performed on airplanes since age 9, when I spent the latter half of a flight from Newark to LAX covered in my own vomit when I couldn't get to the bag quick enough during a particularly nasty bit of turbulence. 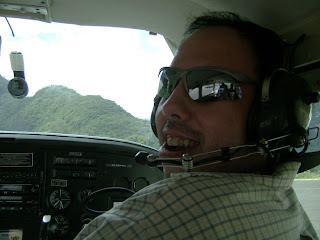 I don't pray, but I said a quick one as we took off. As we soared above Lake Wakatipu, leaving Queenstown behind, I found myself so mesmerized by the landscape before me that I forgot to be afraid. Either that, or the half a Xanax I popped on the ground was working. I pulled out my camera and immediately began snapping away as Becca narrated. It was magic. A scene straight out of the Lord of the Rings. We even flew directly over that film's "Misty Mountains." Wispy clouds encircled their snow-capped peaks and the lakes below were peacock blue. The canopies of the trees below were as lush as a velvet blanket. Now I knew what everyone meant when they said this flight would be a once-in-a-lifetime experience. 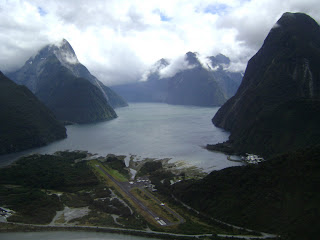 As we approached the Milford Sound airstrip, Becca banked the plane to the left and went into a 180 degree turn. Ohhhh dearrrrr. The plane descended as she turn, my stomach not quite making the drop along with everything else. And I got that feeling. That feeling that you know the vomit is coming. We all know that feeling. The bile rising. The sudden fever. The beads of sweat seeping out of your forehead. Can I hang on for another minute? Just concentrate. Mind over matter. Just hang on. Only another minute longer...

I couldn't hang on. I lunged for the bag and emptied the contents of my stomach into it. Ewwwww...

Before I knew it, we had touched down to land. I was shaking uncontrollably as I stepped off the plane, hiding my bag of puke behind my hoodie. Pauly was grinning ear to ear and excitedly started to show me some videos he had taken. Then, I held up the bag.

"Is that the lamb sausage?" he asked.

Yeah. Guess who will be known as puke girl for the forseeable future.

Unfortunately, the weather was not cooperating. Upon landing, we were given the option to stay in Milford Sound for the cruise and then take a 4-hour bus ride back to Queenstown, or to fly back immediately. I was really torn. On one hand, I really wanted to see more of the area, but the idea of a bus ride that long, without a book or an iPod would be just excrutiating. Then again, in that moment, I couldn't even fathom getting right back on Becca's plane without even getting a few minutes to settle down, stop vibrating, and get my bearings back.

I looked at Pauly. He really didn't want to go on that bus ride. And neither did I. The flight won. We were going back up. Carol, the British lady gave me a couple of motion sickness pills before we got back on.

They didn't work. Before we could even reach our cruising altitude again, I was hurling into a fresh bag. Again, and again, and again until there was absolutely nothing left to hurl. I tried to puke quietly as to not disturb the others and not ruin their good time. I guess the whole noise reducing headphones thing helped out with that as well.

I desposed of the second puke bag as we walked off the runway. I was still shaking and looked positively green. I wondered if the pilots talked about their passengers to each other. Would Becca win some sort of prop bet about getting the most pukers in her plane or something? Maybe my story would be told over pints of Tui in some pilots' bar that evening.

"Puke girl! Puke girl!" teased Pauly as we rode back to the hotel. I wasn't gonna lose this name.

Maybe you are "Puke girl" - but affectionately so. Good read.

At least you didn't puke on the Brit.