"They rolled out the red carpet just for you" I quipped to B.J. Nemeth as we trudged across the Rio parking lot, waves of heat already shimmering off the blacktop. Two red carpets ran parallel to each other, paving the way from the Convention Center's valet parking stand up the stairs, past two new cars that were likely the object of some sweepstakes giveaway, and through a cloud of "cool mist" spun by half a dozen fans lining the side wall. Thousands of poker professionals, degenerate gamblers, homegame heroes, and camera-toting tourists descended upon the Rio this morning, as the 38th World Series of Poker got underway.

As we pushed through the double doors and a blast of air conditioning enveloped us, a wave of familiarity came over me as for the third year in a row, I made that long walk toward the Amazon Room, taking in all those visual cues that have become hallmarks of the post-Binions WSOP. Inflatable Milwaukee's Beast cans every ten yards. ESPN cameras weaving through the crowds, shooting B-roll. Banners bearing the names of corporate sponsors. Scantily clad women. And a Day 1 registration line thousands deep. Seasoned pros that will net hundreds of thousands over the next six weeks stood shoulder to shoulder with total donkeys, willing to surrender their dead money just to say they played in the World Series. I had my own line to wait in along with the rest of the PokerNews crew-- the one for our media credentials. The hour we spent there would actually end up being one of the shorter waits of the day.

The first thing I noticed about the tournament area was the absence of any vending. Gone are the booths hawking heinous poker-themed clothing, novelty sunglasses or memberships to various poker associations. The same goes for all those swank suites sponsored by the likes of Full Tilt and Poker Stars. Bluff Magazine had a setup, as did some credit card company that was giving away free WSOP pint glasses for those who signed up to inevitably take on more consumer debt. There was a large massage area set up as well as an "oxygen bar" similar to the one up in the Excalibur's food court. You know what I'm talking about-- all of those tubes full of flourescent bubbling liquid along a narrow bar where idiots sit with a tube up their nose, allegedly relieving their headache or jet-lag or whatever. So bogus. The Poker Kitchen has moved inside, to where the Full Tilt suite used to be and an air-conditioned tent with 50+ overflow tables has been set up adjacent to the convention center. At one point, Pauly wandered behind it and smelled the wafting remains of what appeared to be some really dank weed. Was it a coincidence that shortly thereafter a floorman came up to me asking if I knew where Dutch Boyd was?

Inside the Amazon Room, the layout has been completely re-vamped from last year. The final table is housed in the back corner, surrounded by stadium seating. The cash game area and the satellite area have traded places and there is a new high-limit cash game subsection that is walled off for additional security. Giant photos of every Main Even Champion surround the room, reminding everyone inside of the WSOP's rich history and greatest ambassadors.

But let's get to the best news I heard all day. I don't have to wear the shirt! There will be no ugly shapeless tees or polos for this girl. My WSOP stress quotient was instantly cut in half. In the words of Johnny Drama, "VICTORRRRYYYYY!!!!" 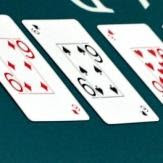 The dominant story of the day surrounded the new "PokerPeek" cards that were introduced in Event #2, the $5,000 half limit/half no-limit hold'em World Championship. As Mike Matusow sat down and looked at his first pair of hole cards, he let out a roar.

"Did you see these cards? These are the worst cards I've ever seen! Where's Jeffrey Pollack?"

Matusow was certainly not alone in his complaints. Johnny Chan was seriously pissed and threatened not to play the WSOP. Some players were demanding refunds. Veteran pros were misreading the board and some started calling out the flop verbally for clarification. Daniel Negreanu called them "the shittiest cards I've ever seen." The suits were printed much smaller than usual making them difficult to differentiate, and the sixes and nines looked practically identical. The only way to tell them apart was literally to count the pips on the suits.

To Harrahs' credit, they listened to the players and went to work to solve the problem immediately (which allegedly involved running over to Caesar's Palace to get thousands of WSOP-branded decks out of their vault). Within two hours, the offending decks were changed out and replaced with regular cards. 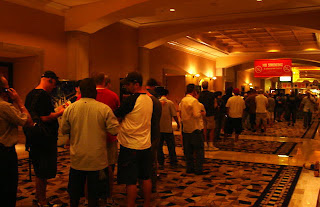 Another major operations kink on Day 1 was the ridiculously long registration line. Well over a thousand people were lined up to register for events (including the first big-field $1,500 NLHE event that kicks off tomorrow), the line extending at times all the way down the hall to the valet parking entrance. People were waiting for four and five hours in this line and a riot nearly broke out when they were going to let people registering for that afternoon's Casino Employees event move ahead of people who had been waiting all afternoon. Thankfully, no punches were thrown.

With a $5K event kicking things off and a field of mainly pros, there weren't too many out-of-the-ordinary fashion offenses, save for the typical Greg Raymer socks and sandals violation and Dan Alspatch's affinity for garish printed shirts and matching visors. Erica Schoenberg didn't even play today's event, but still wins my best-dressed award. She sweated her fiance David Benyamine from the rail, outfitted in white Bermuda-length cutoffs, a sheer sleeveless turquoise tunic, bronze wedge sandals and a white quilted Chanel tote. Isabelle Mercier gets runner-up honors for melding fashion and comfort with her crystal-encrusted cargo pants and gold Jimmy Choo sandals. My little point and shoot digi-cam wasn't loving life today so I'll try and get some photos up in the days to come.

Number of dollars a chicken sandwich, fries, a Red Bull, and a Snickers bar will cost you in the Poker Kitchen: 17

Number of times the credit card freaks in the hallway have already asked me to sign up: 4

Number of hours the average person in the registration line waited yesterday: 4.5

Over/under on when the two green chairs on our patio at the Del Bocca Vista will get jacked: 23 days/June 21

Number of women who complimented Pauly on his cleanly-shaven face and newly slender physique: 2

Number of hours the start of Event #1, $500 Casino Employees' NLHE was delayed due to the lengthy registration lines: 1.5

Make sure to tune in to PokerNews.com for photos and live updates from the tournament floor!

I am amazed at how they could FU the registration process, last year seemed so quick and easy, as for the cards LMAO

Have fun and see you soon

I refuse to believe it took 8 hours for someone to throw the "Aussie Aussie Aussie" chant at Jonno.

I am happy to hear you don't have to wear that shirt. I hate those things.