Which Do You Wannabe? 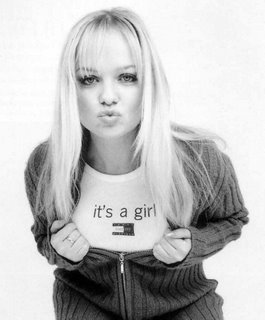 Which Spice Girl would I want to be? I wouldn't want to be Posh Spice.

After watching her husband's adulterous affair splashed across the tabloids, Posh grew anorexically thin, and got hideous fake tits that look like cantaloupe halves stuffed beneath her chest wall. She spends an inordinate amount of time at Tom Cruise's scientology compound in Telluride and has cameras stuffed in her bony, Botoxed face as she sits front-row with cult war-bride Katie Holmes at Paris fashion shows. Then once re-ensconced back in her suite at the Ritz, Katie's Scientology "handler" chloroforms Posh and hooks her limp body up to an E-meter. Once Posh awakens with no memory of the incident, she eats half a cookie and throws it up. Who wants to be Posh? Not me.

Which Spice Girl would I want to be? I wouldn't want to be Scary Spice.

Scary does have the best Spice hair. And a tongue ring. But again, with the rock-hard, hideous cantaloupe-halves she calls breasts! Not to mention that she's engaged to Eddie Murphy. And you know that's been with tranny hookers. Next!

Which Spice Girl would I want to be? I wouldn't want to be Sporty Spice.

Though Sporty was the best singer of the five, there's the matter of that gold tooth. Gold teeth just don't belong on white girls, even athletic ones dogged by lesbian rumors. Sporty also had to deal with also being called "Mel" in the non-Spice world. Just like Scary. So there was the whole Mel B./Mel C. thing. Very confusing. I'm also not fond of active-wear as a permanent fashion statement. Unless Sporty Spice is going to suddenly turn into Cashmere Spice, the whole track suit thing is just not for me.

Which Spice Girl would I want to be? I REALLY wouldn't want to be Ginger Spice.

After abandoning her fellow Spices in the middle of their 1998 North American Tour, Ginger embarked on a disastrous solo career that spanned three albums of progessively worsening quality. She became a U.N. Goodwill Ambassador to only get TOTALLY upstaged by Angelina Jolie in the international do-gooder derby, and still couldn't sell records despite a classy makeover. Worst of all, Ginger had a child and named the poor little thing Bluebell Madonna, ensuring further generations of Spices who will need mid-life therapy.

Which Spice Girl would I want to be? I think I'd want to be Baby Spice.

Baby Spice never had to suffer a major media scandal. Unlike her four fellow Spices, Baby emerged from her fifteen-minutes-going-on-three years of global fame with nothing but a short, forgettable solo career and a whole lotta Spice cash in her bank. She's still cute, still bouncy, still blonde, engaged to some musician chap, and hopes to have all the Spices sing at her wedding. She's been nowhere near the cover of US Weekly in the last five years, has her own real breasts, and has yet to declare bankruptcy.

Too bad they didn't have a Stoner Spice. You'd be all over that.

I mean that in a good way.

Maybe they all were.