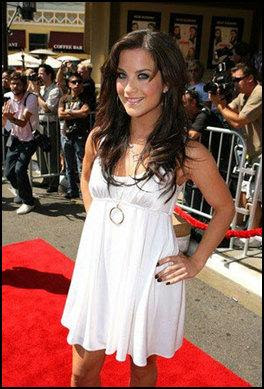 Season 8 contestant Joanna Pacitti, no stranger to the red carpet
Last season, we came to discover that Irish lassie Carly Smithson once had a recording contract. So did Kristy Lee Cook, as a teen. And so did Aussie rocker Michael Johns. None of this was really mentioned upfront, and one could argue that especially in the case of Smithson, that the Idol producers did all they could to hide their "amateur" contestant's professional background.

So this year, when a young woman who has starred in a Broadway show, recorded an album on a major label, had that record debut on the Billboard charts at #31, and contributed songs to half a dozen major motion picture soundracks decides that her career has floundered so badly that her best option is to audition for American Idol, it begs a very important question.

When it comes to the ringers, where do you draw the line?

Well let me tell you this. I had actually heard of Joanna Pacitti before she got her golden ticket to Hollywood. Yes, me, the same girl who had yet to hear a Jonas Brothers song before two days ago when I was sitting in an airport in Santiago, Chile of all places. I remembered Pacitti from when she went by the singular name Joanna, and performed at a New York City rally for then-Presidential candidate Howard Dean in the summer of 2003. A couple of years before that, she had a song on the Legally Blonde soundtrack. OK, if that was it, I could probably forgive Idol for letting a not-even one hit wonder have a shot at the show. But that wasn't even close to the totality of Pacitti's showbiz experience.

In 1996, Pacitti earned the title role in the 20th-anniversary Broadway produciton of Annie. She went on a pre-Broadway tour and got mostly positive reviews over the course of her 106 performances. Then, only a few weeks before the New York opening, she got bronchitis and had to sit out a few shows. One of the little orphan girls from the chorus learned her part and the producers liked her so much better in the role that they decided to fire 12-year old Joanna. So, her parents turned around and sued the producers for $50 million and told their story to any media outlet that would listen. Here's Joanna on the Barbara Walters-hosted Turning Point. Proceed with caution... I take no responsibility for the gagging this clip may induce:

Four years (and, I imagine, a significant amount of therapy) later, 16-year old Joanna moved out to L.A. by herself to pursue a music career and was signed to A&M Records by producer Ron Fair, who discovered Christina Aguilera among others. She got the aforementioned song on the Legally Blonde soundtrack and over the next five years became a veritable tween movie soundtrack staple, contributing songs to Cadet Kelly, First Daughter, Nancy Drew and Bratz. Pacitti released her debut album This Crazy Life in the summer of 2006 and it debuted on the Billboard charts at #31. The album quickly tanked, though and a year later, her label dropped her. She then started dating some dude from Dancing with the Stars and has appeared in the odd tabloid item as recently as last year.

But, seriously-- where do you draw the line? Number of albums sold? The size of the audiences they've been paid to play to? I mean, 30 seconds of Google research will tell you that Joanna once opened for Sheryl Crow for Christ's sake.

This is not to deny Pacitti's talent. She has a helluva voice that I'm guessing is probably a lot better than the teenybopper drivel she once recorded. I'd love to hear her shred some Pat Benatar or Heart tunes on a weekly basis. And after a decade of post-college life in and around the entertainment business, I understand the sheer amount of mindfucks and rejection she has had to deal with in her short life.

But does she belong in this competition? No. This is a girl who has had a more than decade-long career in the industry who has fallen on hard times in the last year. She had her shot. American Idol is about finding someone who hasn't.

OK, enough about Joanna. At least the controversy surrounding her added something interesting to the show this week. Because lemme tell you, the talent this week was thin. These two episodes were full of freakshows and train wrecks interspersed with very few palatable auditions. Nevertheless, here are my top 5 picks from this week.

5. Adam Lambert Here's another borderline ringer-- this kid has already been on Broadway in Wicked! Lambert has a brilliant tenor, though and a commercial David Cook-esque look, and could be Top 12 material if he tones down the music theatre phrasing and affectation.

3. Kai Kalama *SOB STORY ALERT* This struggling musician cares for his ailing mother during the day and plays gigs at night (sniff). Loving the thick, soulful voice, but Kara and Simon are dead-on when they say he has to work on his charisma.

2. Alexis Grace Wow, they do get started young in the South. 21-year old Grace is already a mother of a 2-year old boy, lives in Memphis, and has a husband who is away at military school. But man did she impress with Aretha Franklin's "Dr. Feelgood" exploding out of her lungs like a freight train. She, too has an incredibly commercial look (though is in dire need of some clothes NOT purchased at Wal-Mart) and could likely sing across a variety of genres.

1. Leneshe Young *SOB STORY ALERT* 18-year old Leneshe was raised in and out of homeless shelters by a single mom . She is also possibly the only contestant in Idol history who successfully sang an original song. She's got spunk, a huge voice, is a decent songwriter and is a rags-to-riches story waiting to happen. Welcome to the Top 12, Leneshe.

Two weeks in and I'm already anxious to get to Hollywood. This Tuesday and Wednesday's shows will bring us more audition footage from Jacksonville (where Ryan Seacrest apparently drives a golf cart into a swamp) and to Salt Lake City where the Idol crew goes in search of more Twinkie Mormons in the hometown of David Archuleta. Until then!
Posted by change100 at 4:20 AM

I'm digging this back story, or may be I've always had a hard-on for Annie. I think it's funny that you ask, "But does she belong in this competition? No." Then go on to say, "OK, enough about Joanna. At least the controversy surrounding her added something interesting to the show this week." This show would (completely) suck without the drama and freaks. Then again, I can't watch it past the semis. I need the tears and the oblivious (beyond Paula).