L.A. is Wired for ePoker 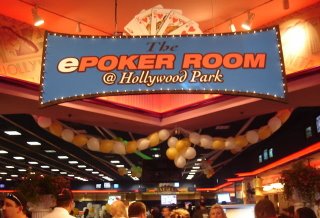 My first glimpse of an ePoker table came amidst the crazed, frenetic energy of the Gaming & Lifestyles Expo at this year’s World Series of Poker in Las Vegas. Ten guys sat hunched over a space-age poker table, its felt lined with shiny monitors instead of chips. Two dozen more railbirds and curious onlookers craned their necks to see what the fuss was about, their glances leaving the action only to catch a glimpse at the scantily-clad trade show models who cruised past, hocking their online poker wares. The table was called “Poker Pro” and it hybridized online and live poker– all of the card action proceeded on screens in front of each player much like an internet game, but players enjoyed all the benefits of a live setting, where personalities and tells can influence decisions. The action also proceeded much faster than in traditional live poker. Everyone seemed to be having a grand old time, and I learned that a dedicated ePoker Room would soon be opening at my home casino, Hollywood Park.

The gracious folks at Pokertek, the company behind the Poker Pro table, invited me down to Hollywood Park last week to attend the grand opening of the ePoker Room. And who, really am I to decline an invitation to go gamble in the middle of the afternoon? Just twist my arm, why don’t you? I got down to HPC just after one in the afternoon and the room was already packed with hungry degenerate gamblers.

The ePoker room is situated directly in front of the main casino entrance right by valet parking so you literally can’t miss it. I walked into the crowd and immediately ran into my pal Johnny, who had come in from Las Vegas for the event. “Run into” is probably a poor choice of words. More like he came at me all smiles in a lateral bear hug. We hadn’t seen each other since Legends at the Bike and we chatted excitedly about the upcoming Vegoose music festival and the Hollywood Park-meets-Star Trek poker tables we were both about to try.

Getting the card was a simple process which involved filling out a form, presenting my drivers’ license, and choosing a PIN number. The next step was to deposit money onto the card. I went over to the special ePoker window at the cage, gave the lady inside my card and $200 and I was set. Cash can stay on your card from session to session, or, you can withdraw any portion of it on the same day. I went back to Johnny and we waitlisted ourselves on the little kiosk next to the front desk. $2-4 and $5-10 limit hold’em and $1-2 and $3-5 NLHE were available as well as several sit-n-go options. $65 and $120 SNGs paid the top three spots (50/30/20 payouts just like online) and the $30 turbo variety was a winner-take-all affair (though chops are allowed, and went on). I soon found myself sitting in one of those $30 turbos, surrounded by an eclectic group of poker enthusiasts. 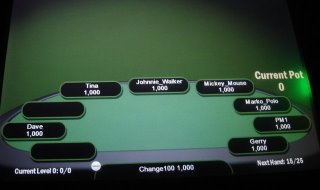 I was sandwiched in between two older gentlemen who had just gone heads-up in a previous SNG. One had a beard, the other wore a straw hat and had racing stubs in his front pocket. The bearded guy had won and they were looking for a rematch. I swiped my card as I said hello, the $30 immediately debiting off my balance. My name popped up on the screen underneath my starting chip count of 1,000. The interface made it look like we were playing an online SNG, just face to face. My hands fidgeted as I reflexively reached for chips to shuffle, but none were there. So, instead of getting lost in my own little iPod and chip-riffling mode as I usually do while waiting for “shuffle up and deal” I found myself checking out my opponents. The young Asian guy in the polo. The bearded guy in the hoodie that was a dead ringer for Spaceman. And the Inglewood version of Dmitri Nobles, complete with the flippped up visor and the air of invincibility. Only this guy had a five-strong posse that looked like the USC defensive line sweating him from the rail . A tiny, shrunken hands-free cellphone was hooked on to Inglewood Dmitri’s ear at all times.

The process of checking my hole cards onscreen and figuring out how to bet and raise took really only a few hands to get used to. I immediately picked up AA and doubled through courtesy of the SNG “Gigli”–Mr. Straw Hat who had hoped to do better than second this time around. Then I picked up AQ vs. Dmitri and played it a little crafty. I knew he had a decent hand, probably a big pair when he called my preflop raise so quickly and he suddenly got all serious after yucking it up with his friends. The flop came ace high. He bet a little less than the pot and I called. Turn was another ace. He checked to me and I checked it back, going for the reverse-delay “gotcha!” The river was a blank and Dmitri instantly pushed in and I instantly called. He showed QQ and his stack electronically evaporated. Ship it!

“Daaaaaammmmn. I knew you had that ace!” Dmitri exclaimed.
“If you knew she had that ace, what you doing pushing in on her, fool?” his friend replied.
“Shut the fuck up, Leon! ” Dmitri was red from tilt as he left us in seventh place.

As we continued on with our SNG, the table talk centered around how great the structures were on the Poker Pro table, but how steep the juice was in return. Compared to live single-table satellites, where dealers are shuffling after every hand, we got in maybe twice as much actual play on the ePoker table, and we were playing in a turbo structure. Several people commented how great it would be to use these tables for satellites to live events and I totally agree. Personally, I avoid the $40 crapshoot satellites to the $200 and $300 events at HPC because they’re just that. If you don’t pick up a big hand and double up in the first 10 minutes or so, you’re pretty much toast, but the PokerPro table’s ease and speed of play could really transform the live satellite experience.

The juice, however, left much to be desired. The $30 turbo SNG I played was, in reality a $20+10 affair. That’s 50% juice, and that’s absurd. The $65 SNGs were $50+15 while the $120s were a slightly more reasonable $100+20. To their credit, the Pokertek reps on hand heard everyone’s comments and criticisms, and are in the process of lowering the juice on all the SNGs. (Hollywood Park actually sets the juice, and believe it or not, these things have to be approved by the California Department of Justice.) In retrospect, $20+10 wasn’t altogether surprising at HPC, where their daily rebuy tournaments charge that same buyin and entry fee, but I’m glad to know not only that it’s being reduced, but that Pokertek listened to player feedback and took it seriously.

I finished a disappointing third in my SNG after jumping out to that early chip lead. Unfortunately a big late-stage coinflip failed me. After saying goodbye and see-you-in-Vegas to Johnny, I headed outside into the afternoon sunlight to drive home before rush hour hit. Guess who was hanging out at valet parking? Dmitri and his posse.

“Hey! Hey lady– did you win that tournament?” Dmitri asked, with hopeful eyes.
“Nah... lost a big coinflip late.”
“Daaaaaaammmmmmn!” Dmitri winced, as he turned back to his friends and peeled a bill off his roll for each one, as they razzed him. Poor Dmitri had bet on me to take it down.

I’ll definitely be back to try out the PokerPro table again, and I’m sure many of Hollywood Park’s regulars will be doing the same. I wouldn't mind tilting Dmitri again, either. 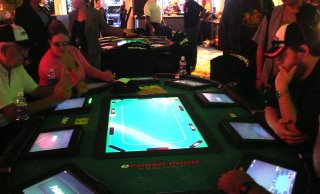 Can you spot Spaceman's doppleganger?

The only way you can know for sure that it's not me: he's wearing an analog watch. They don't work on me.

Apparently they're coming down under as well. The recent email newsletter I received from Crown Casino in Melbourne said they're headed our way in December 2006. I think I would miss cards and chips – to me their part of the 'ritual' of live poker – but maybe like you I'd spend more time observing my opponents. In any event, it looks like they'll be up and running in time for the Aussie Millions tourney here in January.

Can I still play sans pants?

I don't like these things. A lot of the fun of real poker is the chips and the cards...I know I'm only 35 and I sound like your great-grandfather, so this just seems far too impersonal and cold for me. I play online all the time, but that's because I can't drive two hours to a casino every night.

Would be interested in what their rake was on the cash games as well. With the elimination of dealers, you would assume they could lower the cost for players and increase their profit. Nice recap.

I am unfamiliar with this game "sans pants" to which Drizz refers, but I assume if the game AI is sophisticated enough, anything is possible.

I like this concept, wonder if it will hit Niagara soon...

Great post. Check out my new blog when you get a chance. I've played on the poker pro tables and don't like them as the Hard Rock uses them and they give you a horrible tournament structure.

in relation to the recently passed internet gambling act (2006)...
I agree with the legislation which aims to ban credit cards as a payment method for online gambling of any sort... and i think it should be enforced worldwide – not just in America. In fact, gambling with a credit card should be banned full stop. Not just on the internet. It’s a no brainer when you consider you are placing backing the outcome of an uncertain event with somebody else’s money. Chance and credit do not mix well in my opinion, and continuing to allow it would only contribute further in negatively affecting the high levels of personal debt many citizens today find themselves in. I do however, think that the prohibition won't work; or at least it won’t be received well amongst gamblers - I mean what’s the point in banning a credit card payments made on an online poker game, for example, but not online sports betting? Slightly hypocritical no? I mean how can you allow someone to participate [with or without a credit card] in online horse racing betting, but not put any money on a hand of texas hold’em poker? both activities involve a large degree of chance, and neither are guaranteed to yield financial return.
What really infuriates me is that the minority of irresponsible gamblers [those paying with someone elses money!] have now ruined the fun of online betting for everyone else - those like me who pay with money they actually have in their bank!!
At least for the Americans there is always the free online poker games!

I love to have a little gamble online, however iv found that casino games like roulette and blackjack are over really fast and if I lose I feel a bit mugged off its happened so fast! So I decided to start playing online bingo games in particular I use littlewoods bingo it has loads of games not just bingo and a really good tea break area which has great articles!